Any one else noticed

I resintly relized e.a Koetting stuff is on amazon.

I wonder if that is official or a rip off

There is a guy on Amazon who packaged up EA’s 4 Conjurations and sells them in a book as his own work.

It seems unlikely BALG has done this, but maybe @Lady_Eva knows for sure.

If someone did that, they’ve got some brass balls to do that without permission.

They probably assume it would be beneath the notice of BALG, which is often the case unless it is specifically brought to their attention.

Someone asked a month or so back on the forum if any of the BALG releases were going to be brought out as ebooks and I believe Timothy said NO, which is why this seems very suspect. If BALG was going to release the Anthology 3 on Kindle officially, I’m pretty sure it would have bean announced, since people still ask for it.

I actually tried to buy a Ebook from the BALG shop last night I gave up thinking maybe something was trying to tell me not to get it yet, but it could very well be that they moved to amazon

It’s possible, certainly, but it just doesn’t feel like an official BALG release to me. When EA’s works were brought out in ebook form, there was an official announcement on the forum. If they had officially released the limited edition Anthology of Sorcery on Kindle, I’m pretty sure it would have been announced in a similar way. The fact that there has been no fanfare about it makes it suspect to me.

Unless there is some confirmation from BALG, I consider to be a pirated copy that someone decided to try to make money off of, in a way similar to the guy who passes off EA’s 4 conjurations as his own (except EA released the conjurations for free, and the books are all copyrighted).

I flagged the post for Timothy’s and Eva’s attention so hopefully it could be confirmed either way as I wouldn’t mind an e-copy to go with my physical copy.

Makes since and your right Timothy would use his “flair” XD

It seems unlikely BALG has done this, but maybe @Lady_Eva knows for sure.

I don’t know but have sent the link and screenshots to Timothy just now by e-mail, thanks, I’ll keep you posted.

And thanks for flagging this up @DarkestKnight

If you follow the author link, a lot of his books are there, including the complete works, all three volumes of the anthology, the OAA, and some others. Quite odd.

Authentic. I placed them there myself. Do not report as fake.

You may place orders for them if you wish. A fantastic cover designer helped to arrange them.

You may see Complete Works and more here: https://amazon.com/author/eakoetting 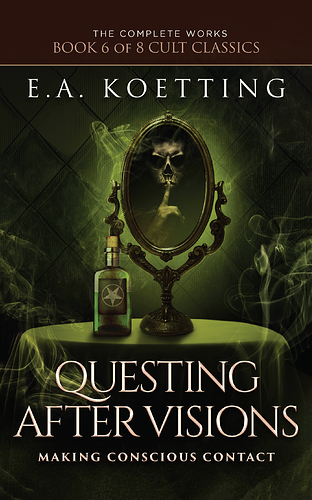 I particularly admire this one.

I hope you weren’t offended by the flair joke, but like I said I tried to buy from the BALG catalog and it wouldn’t let me can they still be bought from there?

Send an email to timothy at becomealivinggod dot com and I can help you out. @Huginn

That is a beautiful cover for QAV.

I just bought the Kindle edition of Anthology of Sorcery 1

Correction, AoS 3… that’s what I get for posting before morning tea