Another creation on my Elemental Pathworking

I have completed my water element tool and built my western temple wall altar. This is the Leviathan bowl. It’s a solid silver bowl. Now I didn’t want to fuck with an expensive ass silver bowl. But I wanted to place cut gemstones that correspond to the water element into it some how. So, what I did was make the bowl into a chalice by placing it onto a pillar stand. I then went to work on the pillar stand as the vehicle for the associated parts. The pillar is painted with a sand paint to resemble the sand of a beach. I placed various shells around it as water element representations. In the center I placed the blue downward pointed triangle and in the center is a triangular Kunzite and in each corner of the equilateral triangle in the 60 degree inner angle is a pearl. A black pearl to represent the chaos aspect of water. And interestingly enough in the Hebrew the word for chaos and water have the same root. Next is a purple pearl to represent the peaceful, mysterious, calm royal nature of water. Then in the bottom is a pink pearl. The caring compassionate and romantic aspect of water. Then on the left side is a rainbow moonstone on the right side is a Morganite. In the side shells are two blue sapphire stones on each side. The snail and nautilus shells obviously representations of the Golden ratio and sacred geometry in nature. Three solid silver rings wrap around the pillar top middle and bottom with a favourite on the base and blue glass beads around the base just for looks but also to resemble sea glass.
On the altar I placed a few tumbled stones in seashells such as a lapis, aquamarine, sodalite, etc and a fossil of a sea snail she’ll in the center. On the pentagram on top, which of course I made the rose pentacle Celtic knotwork 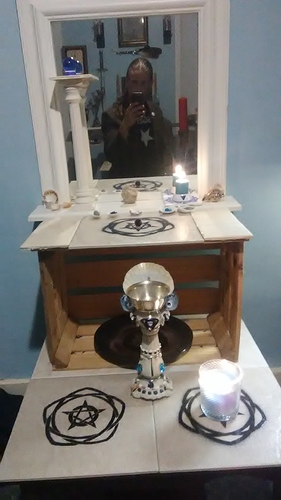 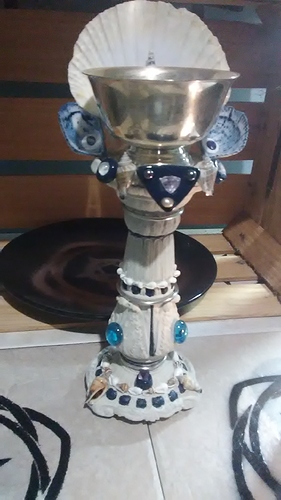 IMG_20191008_212742.jpg1440×2560 834 KB
tiles as well, I placed a blue lapis isocehedron the platonic solid for water. The mirror to be the reflective force of water and of course my elemental candle holder. Plus the blue pillar candle. 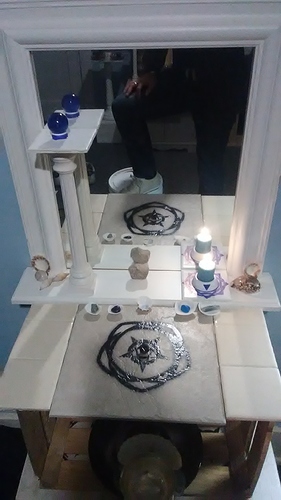 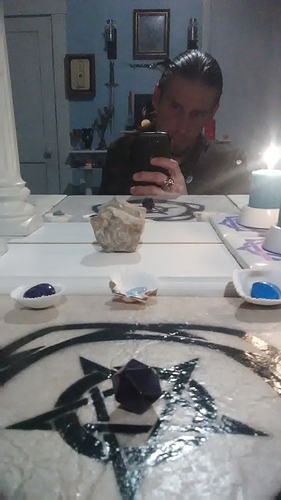 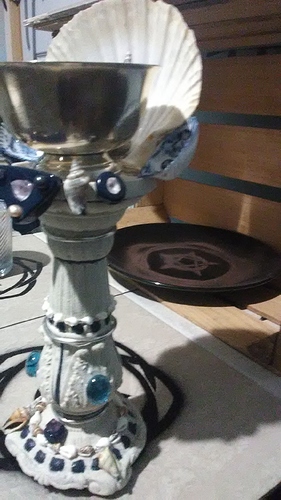 1570595264126.jpg1440×2560 1.15 MB
Of course the parts all were found from synchronicity and serendipitous events that occurred as I was going through the Leviathan water elemental pathworking. The completed altar and tool like the other elements is like a trophy or representation of my rewards earned and control gained over the water element through the Leviathan pathworking. An amazing journey and a learned power over the forces ruled by the water element completed and solidified as an altar of gratitude and dedication to the element to be used in all rituals of water ruled forces and as part of a massive power lent to any ritual beginning with a calling of corners. Cheers!
6 Likes
N.M.Ginnarr October 9, 2019, 5:02am #2

Interesting. You are a man of art I see.