So my wife bought me this Altar Skull years ago… We had it out one night on a table while I was on acid, and it was a very unfriendly vibe with the skull… over the years I’ve hidden it, then brought it out and every time, it seems to make me more than normally depressed and well, negative. I’ve always read that objects previously owned or coming from somewhere before need to be purified.

I’m not kidding, and this week I set it out again on my altar because of the appearance, it’s just got that ominous look.

I suppose could ritually cleanse it, charge it with a new intention?

For now it’s in my closet.

Id cleanse it and charge it again 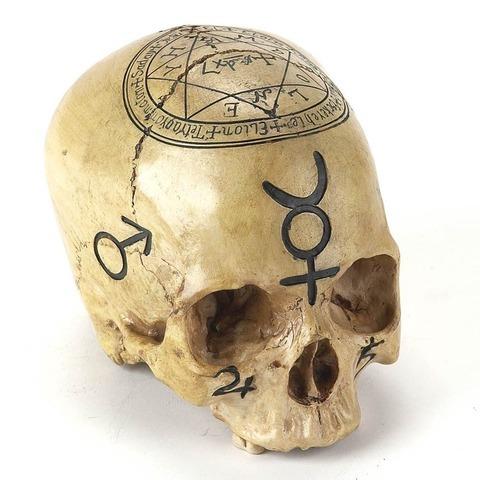 Hahaha! Oh no! The non-euclideon geometry is twisting my mind!

But honestly, that’s pretty cool. Can you show us the other side, the back, and a clear shot of the top? Pretty please?

Hey, it has those planetary symbols on it. Do you like the planetary symbols in general?
It doesn’t’ come off as sinister, mostly boring and generic I’m afraid. Far from being some kind of Left hand Path tool, it looks like something a right hand path magician would buy. (the kind that like to follow the books, or belong to orders, enjoy things like getting initiated into the planetary spheres and mostly ignore practical magic for things like sex and money, cause that is worldly stuff.)

But you are probably thinking, its is a skull, it represents death, omg death, yeah, how about the death of the ego. (And by death of the ego, we don’t mean you becomes some kind of living God, but rather your self esteem gets crushed until you feel worthless, more like some mainstream definition rather than some kind of mystic thing.)

And this is why a lot of right hand paths magicians end up evoking some demons, but they do it as little as possible and try to constrain them with the “divine” (lol) names, because after awhile you get so messed up from that (the banishing, initiations or whatever they do) . Often after that, the right hand path mage with get burned by angry demons, quit magick and/or live in poverty for the rest of his or her life.

And that folks is why I don’t care about the Great Work anymore.