For starters Lise is a goddess from the indie religion that’s quite small known as Genwa. Smaller then the Yanashi faith [Where malleck tous draws from] I would argue because it’s still a work in progress which honestly deserves it’s own thread. Pronounced Gen as in genesis and wa as in water. It’s a religion centered around the concept of lifeforce in the universe. According to this religion the essence of life is in everything and it is also a force of power known as Genwa. Where the religion derives it’s name

Lise is the godess of laughter and love. In Genwa love and sex are two separate things theirs a whole story about and she said so herself to me, but she is the godess of Love and all that that entails. There is a god of Sex specifically in Genwa and he does beauty his name is Bairtaste but this post isn’t about him.

She appeared to me as a beautiful goddess with long brown hair and dark brown skin, and a crown. Golden eye makeup. Similar to the following twitter thread it’s not exactly accurate but it’s the closest I could find:
https://twitter.com/cheriekisa/status/1208531596502061057

The gods of genwa often commune with me via fanart or imagery that looks similar to them as signs or sending their animal my way. Each god and godess has an animal associated with them and Lise’s would be the ant. She’s a fearsome goddess who has both a romantic aspect to her but also a warrior like aspect to her. That’s how she came across and was channeled though this has yet to surface in the religion itself. Their are still stories being told about it and if you’re curios please just check out the website link at the end of this post. While Lise engages with worship as she is a godess this thread is not mean to be a preachy recruitment but rather information on the godess for your own work so you may begin with her.

Theirs a couple different ways to commune with the Genwa Gods. The first method is through traditional evocation or invocation. I’ve had a lot of sucsess with this thread by focusing on the god and creating a sigil for them. I focus on the god’s likenss and push that likness into an image as my hand’s drawing and that’s my method of evocation making oversimplified.

Given the nature of this forum you should know how to do that (evocation and invocation) and if you don’t their are ways to learn that via multiple threads on here, E.A’s videos or the search bar. The second way is unique to genwa and it’s called Scripting. Essentially it’s when you focus on the likness pull them forward and perform a almost rp like dialogue while writing. Here’s an example

Conversation begins:
Me: Hello godess or god
God: Hello name
Me: so i have a few questions for you
God: lay it on me

Exetera. I’ve seen this used as a general spirits comunication method and while it doesn’t have a name she told me she would willingly script with the followers of her and those who wish to worship her.

She can be called upon for romance and laughter. Comedy and things of that nature. She is very light and welcoming. She’s a pretty nice spirit with a light but also somewhat mature essence that can be called upon for these requirments. Make no mistake Genwa gods are usually Worshiped so know that when approaching them, I would argue you should treat this pantheon with the same respect you would treat a hellenistic or hetehn based one. She is a godess.

Lastly she gave me her sigil for you all. She told me how to draw it here it is as presented. She told me her sigil was “A moon, with an upside down cross, and a star to the left, with a rose to the write and they are all connected” this is what I came up with to which she responded “perfect” 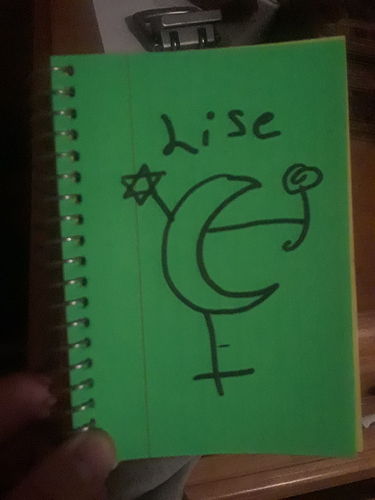 Lastly if you would like to read more on the genwa religion you may contact me on here because I’m pretty knowledable about it or just check out my friends in progress site www.genwareligion.com so yeah! Let me know if you have any questions or concerns about working with her and I will try to help aid the followers on the thread as much as I can!

Hello, there’s a need for some statue or incense to call her or no? I need some entities to help me better my humor

The user has had their account suspended at their request. They’re not gonna see this response.