A weird and scary experience

I decided to make public my last response to you because others might find it helpful.

If you have your own space such as your own bedroom make sure there are no icons in there when you do your magikal work. Protect it well.

Or maybe a better way to go might be to learn about the history of Icons and how you can safely tap into their magik. You may need to work with the christian saints which may sound like the opposite of what you want to do but but many saints are Christianized versions of the old Gods and Goddesses. I know that is the case for the Virgin Mary and Saint Brigid of Ireland. It will take some research though so that the energies work together and not against each other;

The Icons are specifically made to guard and protect against anything Christianity would designate '“demonic” So those energies would clash. That still leaves a lot of room for magikal work. Most Christians would deny that they practice magik and instead call it prayer. I had a grandmother who was a devote catholic and she was known for always having her prayers answered quickly. it was only after I became an adult that I realized that she practiced what I would call magik although she probably didn’t know that.

I understand what you want to say, I know that those icons act like idols or sigils and can somehow change the reality around. (like a gateway) In fact I heard some people calling those icons “gateway to heaven” . Yeah… but the Christ itself doesn’t hate the venerations to idols??? And about practicing christian type of magick- it’s not possible to me, that reminds me of my “old life” which I hate it and I never liked christianity, I didn’t like worshipping, I didn’t like all those false doctrines and false believes that were contradictory with my mind, I didn’t like the control over the minds of masses of people that religions have, I didn’t like many things. It just doesn’t fits me, for me the christ is just an egregoric vampiric entity that was created by the collective mind of people. Another thing why I don’t feel any sort of attraction to christianity is the fact that I had done some blashpemy rituals in the past which freed me of the false views that I had.
“Therefore I say to you, any sin and blasphemy shall be forgiven people, but blasphemy against the Spirit shall not be forgiven. Whoever speaks a word against the Son of Man, it shall be forgiven him; but whoever speaks against the Holy Spirit, it shall not be forgiven him, either in this age or in the age to come.”
“Truly I say to you, all sins shall be forgiven the sons of men, and whatever blasphemies they utter; but whoever blasphemes against the Holy Spirit never has forgiveness, but is guilty of an eternal sin.”

No, it’s not a focal point of any sorts. It just stands somewhere along with other icons that my mother has. Those days I tried to keep my eyes away from that thing cause it gave me weird vibes and when I look at it or is morphing into something or it has hypnotic scary eyes.

Is this picture still in your moms house? Have you tried photographing it again?

I understand. I was just trying to be helpful. 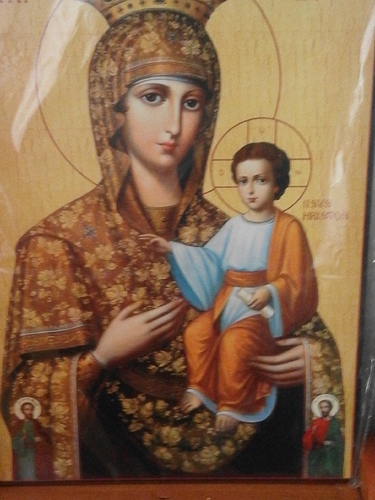 I’ve seen the painting before. You didn’t capture the entity in your posted screenshots I’m afraid.

But as a scryer, I believe you had a right to be terrified. What I saw as I read your OP was certainly assclench-worthy, anyway.

I suspect that what you’re dealing with is a highly advanced phantom/phantasm in the Bardonian sense. It is not an organic spirit, but it’s been around long enough(i.e. centuries minimum) to intimately know how to fuck shit up.

Its an icon a lot of them look like this.

of course, but at the same time no lol

i have a lot of orthodoxe chruch around mycity and this picture never bothered me ever. but this one is sick

Dark Age Art/iconography had a taste for severe eyes, yes. But that isn’t what the OP saw.

Once again, I believe that what you’re dealing with is a long-lived and subsequently very vicious phantasm.

What makes you think it’s sick?

there is something " attacking" my heart chakra each time i looked at it.
yesterday when i looked at it for the first tim i jumped on my sofa of fear! that never happens to me dealing with demons and spirits i am used to energies but this? i don’t know, it just took on me again with the new shot of this morning. my heart is still racing, can’t help, i’ll call lucifer to calm me for real!

I could be his subconscious created a astral parasite feeding off his hatred for religion.

that’s what LCF says, you are right @Dusk
it’s an energy attached to the icon in some kind of way, sounds russian /balkan or something very dark19th century, dark/ rasputin like

So basically ignore whatever it is you think is on the painting, because if you’re that worried about it, feeding it attention is going to feed it energy, and its phantasmal effect will get stronger.

Ignoring it will starve it of energy, also @Alex01 have you had any poltergeist activity?

Yeah, I had in the past and I dealt with terrifying presences or I was feeling eyes out of nowhere watching me. Those experiences happened a lot, I can remember once that I was feeling surrounded by those forces when I was meditating and I decided myself to try to make contact with those forces, right after just trying to address to the entities/forces around me the presences in the room solidified and was even more creepy and I was able to feel a voice/voices whispering or trying to say something. (I am not really clairaudient, but I can know for a fact that something wanted to have dialogue with me, also I was feeling a very painful pressure sensation on my 3rd eye) After some minutes I left the room terrified and didn’t back till the next morning, I gave up with meditation because I was too scared. Also sometimes I just can’t sleep and I’m thinking about my sister that died 30 years ago( before I was born ) and most of the times when I think about her emotions and sentiments rise in me and those emotions are accompanied by hearing sounds(physical sounds) and feeling a presence near me, sometimes I even can see a white kind of transparent silhouette of a human form near me. I don’t know, I never asked my parents if she died in our home or somewhere else, but maybe it has a connection?? Oh, and awesome, you work too with Azazel

I don’t care too much about it, it’s just a thing and of course I know that paying attention to this will just empower the icon. Those poltergeist activities happened and are happening a lot and I know that it will not stop in the future. I take the good part of it, I have experiences that prove that magick is real, experiences that show me that I wasn’t blind or in a labyrinth of any sort. That motivates me to practice more to find more answers.