A Question of True Sovereignty

I recently read a book by Craig Williams called “Cave of the Numinous” and the point is made that not only the Western Esoteric traditions on a whole have their roots in Vedic Practices, but also being somewhat lacking in personal sovereignty in relation to their gods. The observation is made that most western esoteric scenes involve merging (absorbing) oneself into a certain divine power to that aligns with one’s will while the objective of Left Handed Tantra aims to claim a sovereign place apart of external intelligences and destiny imposed by them. This is done by realizing the inner hidden such, which is NOT the Black sun, but the inner light of intelligence. Left Handers tend to speaking of “getting to the root” of spiritual being and claiming true sovereignty but seem to focused strongly on the black sun and allowing very self aware “Qliphothic” entities to seemingly ride/consume/saturate their beings with their energies.

This is why I have recently taken a liking to the overarching concept of planetary magick; to absorb and utilize energies from the universe itself to carry out my own unique agenda and not necessarily giving my spiritual body to infernal beings who (by nature) seek to conquer. I also noticed while demons tend to like payments of the bodily nature, (blood, sexual fluids, deeds, etc.) an angel like Gabriel (Whom I’ve briefly worked with) may coordinate events which seem to be a “slap on the wrist” but realizing that these event steer me toward awakening to an alternative path/method in reaching my goal that’s better suited for me. Not a change in goal, just a realization of error in methods. Payment for angels seems to be the promise of enlightenment itself rather than offering up a part of yourself directly to them or utilizing a skill they assisted in attaining for conquest or imposing control. The story of Saint George comes to my mind on this.

My personal observation is that no matter where you look in the occult, every practice of every tradition/system involves taking energies of external into you to work your will, whether is celestial, angelic, demonic, void dwelling, or other. Every commitment to personal power comes from devotion, whether to a tradition, entity, or personal system. I know humans are inherent emanations of universal powers present in all entities, being our connection to it and what we perceive is partly because of our own subjective perceptions. But these powers are truly none other than naturally foreign because these worlds exist whether we are born into flesh or not. My question is whether true sovereignty is really at all possible in this spiritual universe.

Apologies for the lengthy post. But I knew I’d have to explain myself on this one.

My question is whether true sovereignty is really at all possible in this spiritual universe.

Yes, when you flip the script and see all forms as emanations of your own godself.

So, anything external that brings power is just a part of you, yhat you placed on “layaway” - like the body lays down fat to be accessed when fuel is needed.

I mean that’s my take on it anyway.

So the “Atman” (core self) does not exist objectively but is instead expressed through basically anything you use your intelligence to bring into your world?

BOTH - that’s the Divine Paradox in action:

The universe is; and is not - these two poles of truth are the Absolute and the Relative - and half-truths, such as when new-agers play “blame the victim” towards someone who’s manifested an illness, are a trap for feeble minds.

The concept that you create your own reality is only useful when you are on the inside, experiencing it as an empowering belief, and should never be used to dismiss someone else’s cry for help (and that works out logically, as well - if you hear their cry, then by that theory you’ve manifested them into your life and arguably have a partial duty towards them for the event and their suffering, which is also your own manifestation. The only way out of that duty is to make the decision that they and their suffering are completely irrelevant, in effect deleting them from your own reality field by ceasing to care, but that’s not a step most new-agers who tell victims of abuse that they must have manifested it for some reason are willing to take).

This seeming paradox regarding what is, and is not real, is an aspect of the Principle of Polarity described in the Kybalion.

This is why the RHP argument “Everything is as it should be/is according to God’s will” is a cop-out, because what’s right for God/the All/Source is a different thing to what matters to us, the finite differentiated beings who have to deal with it at ground-level.

Oh, I see. Entities (and their emissaries) who seek to maintain physical balance apart from human will in the world (nature) place their focus on controlling the external simply by shielding knowledge of the internal; by veering sights away from the self.

I was wondering, @Lady_Eva, if you could delete my account soon if possible. I am joining the Military soon so I’m leaving. I will return after long time with a different account.

I can block it, sure - PM me when you’re ready.

All the rest is JMO, still figuring this stuff out, but the DP stuff I posted above has fit with every extreme experience I’ve had so far and passes the sniff test for me, based on that.

In mathematics (such as studied in the old mystical traditions like the Pythagorean schools) there is a paradox which “proves” this issue.

First you start with the understanding that a circle represents the origin of things, unity, completeness etc.

You divide those two circles into another two (giving four)…their circumferences together will also equal the circumference of the initial circle.

But now say you continue to divide that circle (as is the reality of life…) Eventually you will reach a point where the “circles” all are so small that they are essentially a line. Lined up on the diameter.

Then the circumference is the same as the diameter…or numerically 3.14159 = 1 or in words all the differentiation is unified as one. 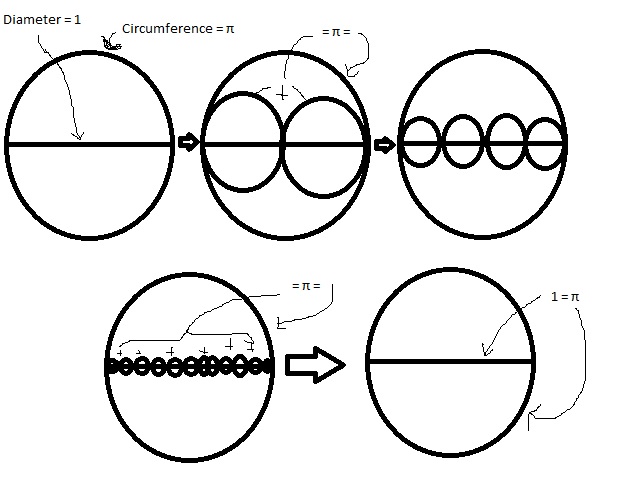 Forgive my crappy paint drawing, but I thought an image would show it better.