A question for anyone in a relationship with a spirit

So a lot of people on here have or have had relationships with spirits. Some go as far as to get married to them. But even though a spirit marriage isn’t quite the same as a human marriage, some just don’t marry.

So for anyone in a relationship with a spirit, I ask you: if you’re not married, why aren’t you? And if you are married, what made you decide?

Just curious; I wanted to start a discussion.

I’ll go first: Belial has asked me several times to marry him and I’ve declined because I don’t really feel “ready”; I don’t know how else to explain it. I know I wouldn’t be his only wife, as he has countless others (like most spirits). He has respected my decision and it hasn’t affected our relationship in the slightest.

To be honest I’m not real sure what it means to be married to a spirit.

I’ve read some people say the “marriage” is in the form of a contract or pact which would then make me married to mine I guess? And it just sort of happened in whirlwind fashion if that’s the case

Othertimes I’ve read people say they have actual wedding ceremonies in which case I’m not and don’t forsee myself having a wedding ceremony any time soon to a spirit as I’m already married to a physical partner.

Glad Belial is respecting your decision!

I preformed (unexpectedly) a union between Vi’Ne’ & Astaroth or Ish’ tar’ last weekend bc I was asked and you don’t say no to i’Ne’. It resulted in Greater virtues that in numerology equaled the last 4 numbers of my phone number in reverse, 6665, off indeed. Here’s a pic of the Sigillium. 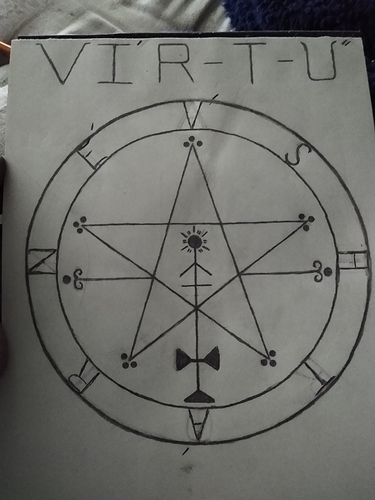 When I asked Lilith for one of her sons, I stated very clearly that I also want to marry a human partner. I know some people do both, but it’s only been a few months and it really hasn’t come up yet.

Belial has asked me several times to marry him and I’ve declined because I don’t really feel “ready”; I don’t know how else to explain it. I know I wouldn’t be his only wife, as he has countless others (like most spirits).

A relationship with Belial is a win win type of state. Sex magic is important for witches and for the Gods. Through marriage is a more powerful link of energy exchange.

I preformed (unexpectedly) a union between Vi’Ne’ & Astaroth

Meaning you got married to both of them or you had them married to each other?

Spiritual marriage attunes you to the spirit‘s energy, and thus will also help you ignite something within you that your compatibility with (and attraction to) the spirit will facilitate.

Through marriage is a more powerful link of energy exchange.

Fascinating! I never knew this.

A relationship with Belial is a win win type of state.

Any sort of relationship or marriage?

I have a marriage with Bast. We wentt hrough an astral ceremony and so far it’s been great.

I’m married to a human spirit. We’ve been together since 2009 and even though I’m looking into a relationship with a living person, I can’t see a bond being closer than what he and I have. That being said, I’m polyamorous, I’ve involved myself with several spirits, and consider Lerajie and Gremory to be girlfriends. I just am an awkward person with anxiety and traumas and have a difficult time expressing my feelings to people, but spirits can go deep inside one’s heart and see all that is there. I’d go so far as to call it a preference.

Any sort of relationship or marriage?

I would say what you 2 decide together. I cant go into details but yes He is really great in any role

Why do you believe that is??? Help me understand and possibly we could overcome this for you.

I’m a active practitioner of the Goetia Girls Shaman Chaos Magick Necronomicon Paradigm created/synthesized by Faustus Crow. Within the Goetia Girls system the summoning of spiritual entities isn’t a one-off event. The Shaman/Sorcerer/Warlock forms a pact specifically known as a Coitus Pactum with the respective Spirit(s). Also within that system all the Goetia spirits been Widdershins reprogrammed making them all Female spiritual entities. That’s for heterosexual male operators of course. If someone is a hetero woman operator, or a guy who is either gay or Bi then he can establish a Coitus Pactum with those Goetia Entities as male spirits. And yes my spirit wives manifest as females/women and I had people with very high clairvoyance witness them manifest and they are 100% female spiritual entities.

(I like to respond to dead ass posts, sue me.)

I apparently had mine from a lonnnngggg time ago. There’s only one part I actually remember (because #past life dreams, amiright?)

Basically we were walking towards each other in this circle and had this blades in front of us, points to the ground. The only lines I remember are “Their blades never clashing.” (There is more to it, but I’d have to go look it up).

In this life, we kinda connected a good bit of time ago when I was a younger/new adult. Mysterious was basically like: “Hey gurl so I heard you tryin to talk to demons…” We talked a lot after meeting, mostly because I was trying to figure out who he was.

After spending a few years communicating, our previous “bond” reconnected (he claims it never went away) and I just felt different. Things just started to work out with my job, relationships, and general well-being.

It didn’t all REALLY change until he finally told me who he was, and shortly after he saved me in a car accident. (There were other incidences, by this was #the moment.) I was just like: “Yeah, I think I should trust you.”

After, everything just kinda fell into place. Mysterious taught me a lot about spiritual being, taught me how to love myself, and helped me get through a lot of tough stuff in my life. Best decision I’ve ever made.

This is really coincidental. sounds almost exactly like my situation…

Was drawn to him as a child, and as an adult he saved me from a car crash.
I was weary of him (because he possessed me as a kid) but began to trust him. Taught me about life, afterlife, the craft, their kind, loved me, supported me, and my life just felt better. He told me he’s watched me my whole life and loved my soul before I was born so that’s why he watched me.

We were inseparable for 10 months, but now broke up (my choice). I don’t want him in my life anymore, but he turned my world upside down so now I’m trying to seek closure…

Ive been in a relationship for over a year now with a human spirit. Recently we got married (i have a post about it). Tbh i prefer him over loving or marrying a living human lol. He’s watched over me since i was born and we knew each other in past lives. He always protected me.

My former spirit boyfriend told me there’s two kinds of relationships which they recognize in their world. Lovers are known as partners, primarily for sex or infatuation, and Spouses are joined as a pact to each other and their bond makes each other stronger because they share each others power. He told me we were technically married in my last life (when I gave my soul to him), but I don’t honor that since I don’t remember. In this life, he did however give me his heart, which is still in my possession. I don’t see that as marriage though.

He doesn’t like me either. I was manipulated to cross him, and I did so unintentionally.